Fog cooling systems add humidity to the air and reduce greenhouse temperatures by producing clouds of water droplets which remove heat from the air as they evaporate.

Ideally, the cloud should remain suspended in the air long enough to completely evaporate and not condense on surface areas.

The clouds are made up of tiny water droplets, which are generated by passing water under great pressure, usually from 400 pounds per square inch to as high as 2,000 psi, through tiny holes or nozzles.

Fog cooling can be used in both mechanically cooled or naturally ventilated greenhouses year-round. In the summer, the fog evaporates, cooling and humidifying in the air. In the winter, it maintains humidity levels to prevent plant dehydration caused by heating systems.


Manufacturers say that fog cooling can be used with any type of crop. It also can be used in propagation areas, and is particularly good for plug production because it adds humidity to the environment without saturating the medium and inducing disease problems. 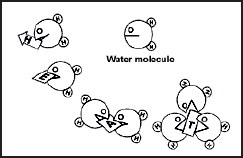 Each gram of water that evaporates will absorb 539 calories of heat. For example: Aquafog operating at high output may be able to achieve the complete evaporation of 20 gallons of water per hour. This amount of evaporation would absorb 39,118,464 calories of heat, equivalent to 155,232 BTU’s or 12.9 tons of cooling.