Propagation of plants from cuttings is of such importance that considerable resources and attention are employed to assure success. While many improvements have been accomplished over the years, the inability to reliably propagate cuttings of all species shows that more improvements are needed. Research was begun in 1974 at the Hampton Roads Agricultural Experiment Station to minimize or eliminate the weaknesses found within accepted propagation practices. Eliminating the application of excess water and its resultant soaking and cooling of the propagation medium was the primary objective of this research which resulted in the introduction of ventilated high humidity propagation. 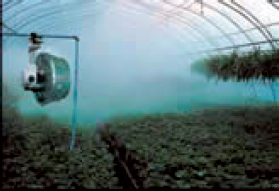 Relative Humidity is the amount of humidity relative to the maximum amount that air can hold at its existing temperature and pressure. Ambient air always carries some moisture. When ambient air is expanded by daytime solar heating, its moisture carrying capacity is increased while the amount of moisture that it carries remains the same. The amount of moisture it carries relative to the amount that it could carry (relative humidity) is decreased. When night air is cooled, it conversely contracts and is capable of carrying less moisture. The moisture it carries then becomes a larger percentage of its total capacity (increased relative humidity). If the percentage exceeds 100, the extra moisture condenses as dew, a condition defined as its dewpoint. Ambient conditions that condense moisture into drops produce rain. No humidification is required for propagation when the ambient air is near its dewpoint. Therefore, humidifiers are needed only during daylight hours and are not needed during the night except during periods with unusual hot night winds.

Humidification occurs whenever unsaturated air comes into contact with water. In respect to humidification for propagation, the amount of exposed water surface and the duration of exposure determine the extent of humidification. The amount of exposed water surface is increased by dividing water into a multitude of fog sized droplets of less than 50 microns in size. The duration of exposure is extended by carrying these droplets on an air current. Evaporation during humidification further reduces the droplet size until they remain airborne even in slowly moving air. Droplets suspended in an airflow are unstable. They are produced by high velocity movement and are subject to collision and uniting to form larger droplets until their speed is reduced. During cool weather, droplets remain heavy for longer durations and most of them are carried through the exhaust vent without causing any problems. Their larger sizes also increase their chances of collision. Collision enlarged droplets quickly settle and wet the cuttings. While some settling causes no problem, excessive settling should be avoided by reducing the water flow rate to the humidifier.

Technically, ten to twenty gallons of water are required per hour to humidify each one thousand square feet of area. The smaller amount is adequate during cool weather and when the greenhouse is heavily shaded. Fifty to seventy percent shading reduces the amount of heat generated during the summer season to manageable levels and still allows ample light for the cuttings. Heat reduction is necessary during the summer season but is not always advised for the winter season. During cool weather, ventilation may be stopped to reduce heat losses but humidifiers must remain in operation at low rates to replace the moisture that condenses on greenhouse walls. Condensation can be reduced by using low humidification rates and by removing greenhouse shading to increase solar heating so that exhaust fans will operate.

Rooting solar radiation will heat a greenhouse 8 to 15 degrees F. higher than the outside air. This rise in temperature is due to the slow transfer of heat from hot inside air to the plastic film or glass greenhouse covering and on to the cooler outside air. This increase in temperature is higher during the summer season than it should be for growing plants. Cooling by other means must replace the heat movement through the greenhouse covering before cooling has any effect on the interior temperature. To cool a greenhouse effectively with a fan, the interior air must be exchanged approximately once per minute.

Humidification equipment cannot humidify completely at this rate. A greenhouse with 3000 square feet of floor space would contain approximately 35,000 cubic feet of air. For humidifiers capable of humidifying 7000 cubic feet of air per minute, an exhaust fan of this capacity would exchange the air once each five minutes. The combined cooling from evaporation during humidification with exhausting of hot air is adequate to cool the cuttings of a shaded greenhouse.

Shading reduces light intensity so that less heat is produced for the ventilation system to remove. The reduced rate of solar heating can be used to either decrease the humidification rate or increase the area covered by each humidifier. Shading also moderates the temperature so that less readjustment of the humidification rate is required. The minimum amount of light needed for propagation is not well defined but reduction of rooting has not been observed with as much as 80 percent shading. 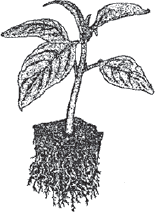 During cooler weather, a high rate of air exchange is not necessary and if it is not reduced, excessive cooling will reduce root initiation. Operation of the exhaust fan should be thermostatically controlled so that its operation will cease during cool and cloudy weather. Temperatures of the propagation medium will remain more favorable for rooting even when the humidifiers remain in operation.

Temperatures favorable for root initiation are not well defined. In general, increases in temperature favor root growth. Most species tend to tolerate temperatures below 90 degrees F. except poinsettia, cotoneaster and pyracantha. These require slightly lower temperatures and show high temperature damage as a buff color and brittleness of new roots that occurs without killing them.

The most frequent failure in high humidity propagation is moisture stress resulting in leaf drop. It was common before mist and can be seen whenever humidification is not properly used for propagation. Humidification systems that do not provide for adequate circulation of humidified air among the cuttings function poorly because of the nature of solar radiation.

Sunlight passes through clear glass, plastic and air without heating it. It is absorbed by opaque surfaces, especially dark colored surfaces such as leaves and the propagation medium. After absorption, light is converted to heat and radiated or conducted to the air surrounding the cuttings. The humidity is lowered by expansion of the heated air which causes cuttings to wilt and leaves to eventually drop.

By slowly oscillating the humidifier in a horizontal arc over the cuttings, the effectively humidified area is greatly increased. Since air movement for ventilation moves from one end of the greenhouse to the other, the arc of oscillation is more effective if it does not circulate counter to this movement. Humidifiers placed at the edge of the greenhouse efficiently circulate over ninety degrees and when placed at a distance from the edge, 180 degrees.

In the most advantageous positions, one humidifier is capable of circulating humid air over approximately one thousand square feet of floor space. Under heavy shading or during cool seasons, circulation of humid air among cuttings can be less thorough. Then the area capable of humidification by one humidifier is less clearly defined and may be extended to twice or three times this area.