The sun emerges over the horizon, bringing a sudden brightness as dawn breaks. Radiant energy streams into the greenhouse, piercing the blanket of cool air that lightly covers the plants inside. A dangerous warming pattern begins. 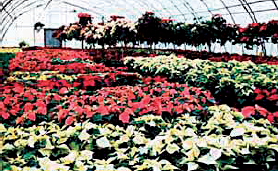 As sunlight strikes plant foliage, heating occurs, and warmed air begins to rise inside the greenhouse. Trapped heat escapes through the ceiling and walls, while cooler air moves down the side of the greenhouse and laterally through the plant production area. This cooler air warms as it encounters new heat generated by the sun. The warmer air rises again, completing another cycle.

This natural pattern of air movement, common to most greenhouses, can result in serious heat and water stress to plants as leaf, stem and bud tissues are robbed of vital moisture. As solar heat builds, water is evaporated from plant surfaces. Warm expanded air has a higher capacity to retain moisture, so water is removed from the sites of evaporation as the heated, newly humidified air rises. Excess moisture is deposited on the ceiling and wall of the greenhouse as condensation. Cool, drier air then descends the walls and re-enters the plant production area where it picks up moisture once again. The plants and rooting medium become increasingly dry, causing wilt.

A common option for replacing water lost from plants involves mounting high pressure fogging nozzles overhead. However, the addition of fog alone is often not enough. Fog production should be coupled with strong horizontal airflow to ensure that water particles are evenly dispersed and high humidity is maintained among the plants where damaging heating occurs.

Advances in fogging technology have enabled fog production and horizontal airflow to be combined in a single, portable machine. High capacity foggers generate ultra-fine water particles and incorporate the fog into a humidified laminar airstream. Adjustable fog output allows both continuous air movement and uninterrupted fog production. If weather conditions change or humidity requirements fluctuate, the volume of water dispersed as fog can be adjusted easily without disrupting or slowing air-fog movement. 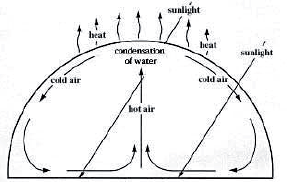 Greenhouse Circulation: The advantages of forced airflow with fog are three-fold: fog is distributed uniformly throughout the greenhouse, oversaturation is reduced and evaporative cooling accelerated.

Uniform dispersal of fog in all areas of the greenhouse, particularly under the leaf canopy in heavy production areas, drives hot, drying air out and replaces it with cool, moist air. This exchange helps maintain the turgor pressure in plants, dramatically reducing wilt.

Preventing oversaturation in areas of heavy fog production is equally important. If dense, newly-formed fog is allowed to settle under gravity onto foliage it encourages closely spaced water particles to collide and merge into larger droplets. The resulting fallout causes excess wetness in localized areas leading to disease, leaching of nutrients and undesirable cooling of the rooting medium.

Propelling fog outwards from it’s point of origin effectively disperses dense fog from the moment it forms and greatly reduces collisions between water particles. As air laden with fog travels the length of the greenhouse it contacts warmer air and the fog particles vaporize, raising the humidity and cooling the air. Thus, plants depleted of moisture receive relief from both water and heat stress.

When teamed together, fog and horizontal air create a thriving environment for plant growth.

Jaybird Manufacturing has engineered a humidifier which efficiently generates high capacity fog while dispersing it in a powerful laminar airflow. This fogger has become known as the Aquafog. It was first launched as a means of propagating hard-to-root cuttings. However, the benefits of air-fog propulsion have become a cornerstone of higher profitability in many new areas of application, including high yield plug production.

The Aquafog’s versatility and ultra-fine fogging capability also make it effective for greenhouse pest control. Soluble pesticides can be applied uniformly and quickly after employees and customers have left the area thus reducing the hazards of chemical exposure. The Aquafog’s nozzle-free design also eliminates plugging problems.