The most common way of applying pesticides in greenhouses is by hand with high-pressure, high-volume systems. This involves fully dilute wet sprays applied under the historical concept of “spray to run-off.” It is common for applications to be in the range of 100 to 800 gallons per acre, depending on the type of crop, its stage of growth, and the target pest. Despite the well-documented evidence that less than 1 percent of the active ingredient applied through wet spraying actually reaches the target pest, the ease and familiarity of this application method makes it routine among growers. Likewise, pesticide labels consistently reinforce this application technique and have contributed to the continued dominance of dilute sprays in the greenhouse.

However, the low-volume aerosol applications, such as fog, rotary atomizer and electrostatic, are gaining favor with an increasing number of growers who see the potential to increase spray deposition, improve efficacy, and reduce application rates and times.

Another low-volume system gaining attention in the U.S. market is the rotary atomizer, or spinning disc, applicator. These applicators rely on the technology of liquid flowing off a rotating disc. A fan behind the rotating disc helps propel spray into the plant. The turbulent air helps achieve a better deposition on plants. The atomizer also produces a very uniform droplet size.

Meanwhile, an intriguing development in application technology is the use of electrostatic sprayers, which also produce small droplets of highly concentrated pesticide. These droplets are electrically charged as they leave the nozzle. The droplets penetrate foliage and adhere to all plant surfaces, including the undersides of leaves. Manufacturers claim that these sprayers provide excellent pest control while using very little water, which reduces the total amount of pesticide needed. 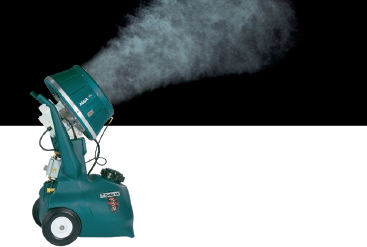 Evaluating fogging and other low-volume application techniques is extremely complicated because of the diversity of target crops, the multitude of potential target pests, and the variety and action of pesticides available. The evaluation process has been further complicated by the introduction over the past several years of many new sprayers, each boasting numerous and varied improvements over conventional full-volume wet sprays and earlier models of low-volume sprayers.

In a nutshell, the low-volume, high-concentrate application provided control that was equal to or superior to conventional full-volume spray while using 40 times less water in an equivalent area. And although this study was done keeping the pesticide rate per unit area of bench space the same, results from deposition studies show that the superior foliar coverage (approximately 3.7 times that of conventional wet sprays) provided by low-volume application suggests the potential of reducing the active ingredient by three to four times.